Orbea set the bar for lightweight eBikes that carried the feel and performance of their analog siblings with the introduction of the carbon framed Rise eBike models based off their Occam trail bike. Now, they've done it again by introducing an alloy version of the Rise eMTB that takes all that Orbea learned from the carbon version and packages it in an aluminum frame that allows them to bring much of the same performance and weight, but at a significantly cheaper price. The changes and updates don't stop at the new alloy frame. Continue on to watch our First Look video and to read about all the intricate details that make the new Orbea Rise H eBike models so tempting.

The popularity of “light ebikes” has not stopped growing since its recent introduction to the market. The feeling of rolling like a mechanical trail bike and its handling on the trails have made many ebikers opt for this type of bike, while many others have made the leap from traditional mechanical bikes.

Orbea hit the table by debuting a whole new philosophy for ebikes last year with one of the lightest electric bikes on the market: Rise. Developed with the Rider Synergy (RS) philosophy, this model introduced the idea of a fully integrated system where power, weight, interface and autonomy are considered together. Now, Orbea brings this philosophy to a wider audience with the addition of three aluminum models that are joining the Rise family. 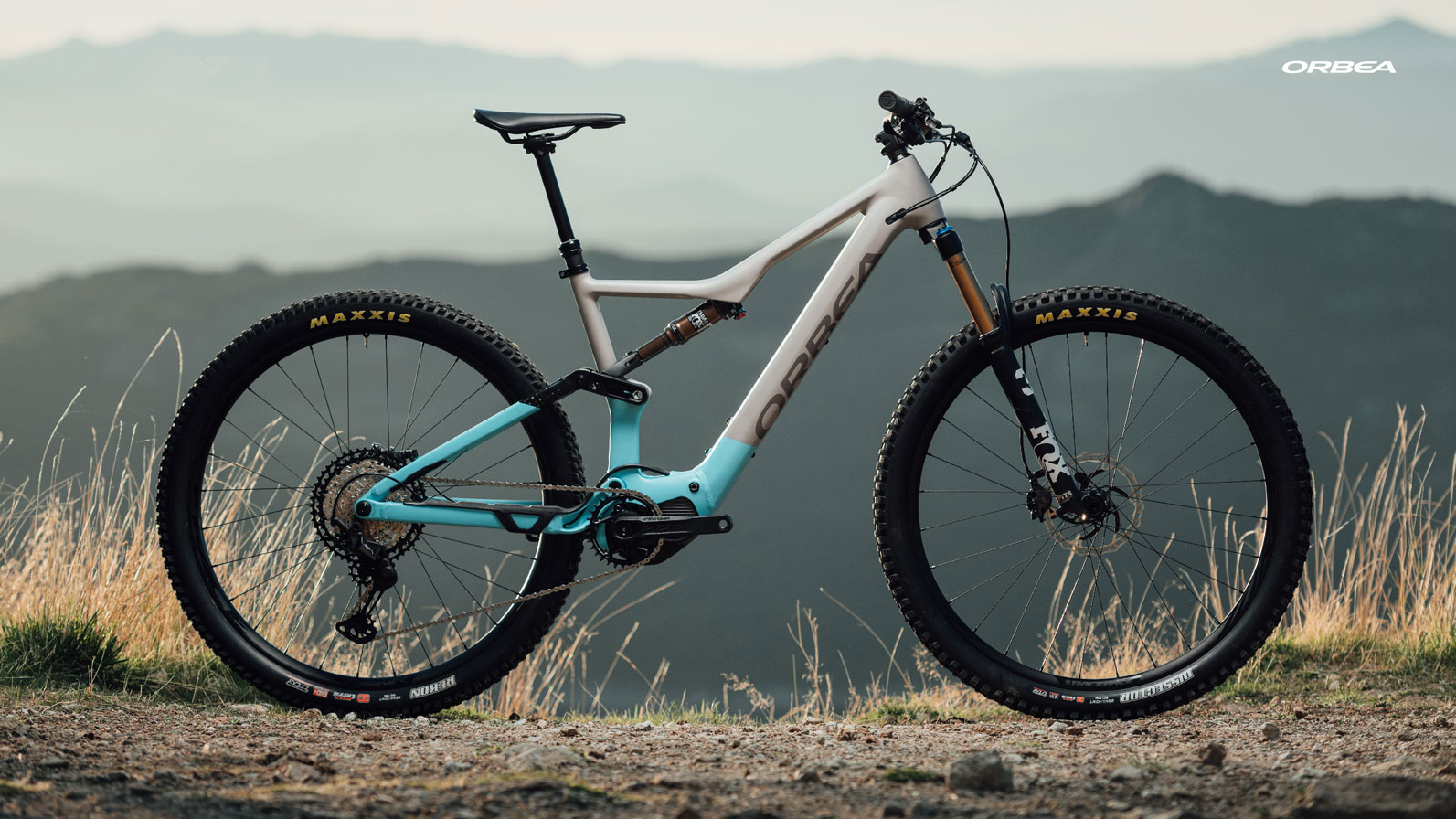 Same RS experience but in aluminum

Like its carbon sister, Rise Aluminum’s power comes from an EP8 RS motor, developed in an exclusive collaboration between Orbea and Shimano.

Orbea acted on the motor firmware to offer the most natural and efficient assistance as possible, eliminating drag and power delay that’s typical of conventional ebikes. The motor was also optimized to provide maximum assistance between 75 and 95 strokes per minute, the cadence at which the human body pedals the most efficiently and where we normally pedal our standard mechanical bikes.

This means that the harder we pedal, Rise responds instantly with more power, with a feeling of natural assistance.

Another unique aspect of the RS philosophy is its autonomy. Due to the lower power consumption, the lower weight of the bike and the greater dependence on the rider’s legs, the battery in Rise lasts about 50% more compared to a standard ebike. This translates into surprising autonomy for the 360Wh battery in the carbon models and a whopping 540Wh in the aluminum models with a completely redesigned battery.

Weight is another key to Rise and something Orbea invested many hours in to optimize the details of the models: frame, integrated battery, cable routing and push buttons were taken into account. Motor optimization through the Rider Synergy also allows for trail components to be mounted, which saves weight and enables the bike to handle like a mechanical trail bike. 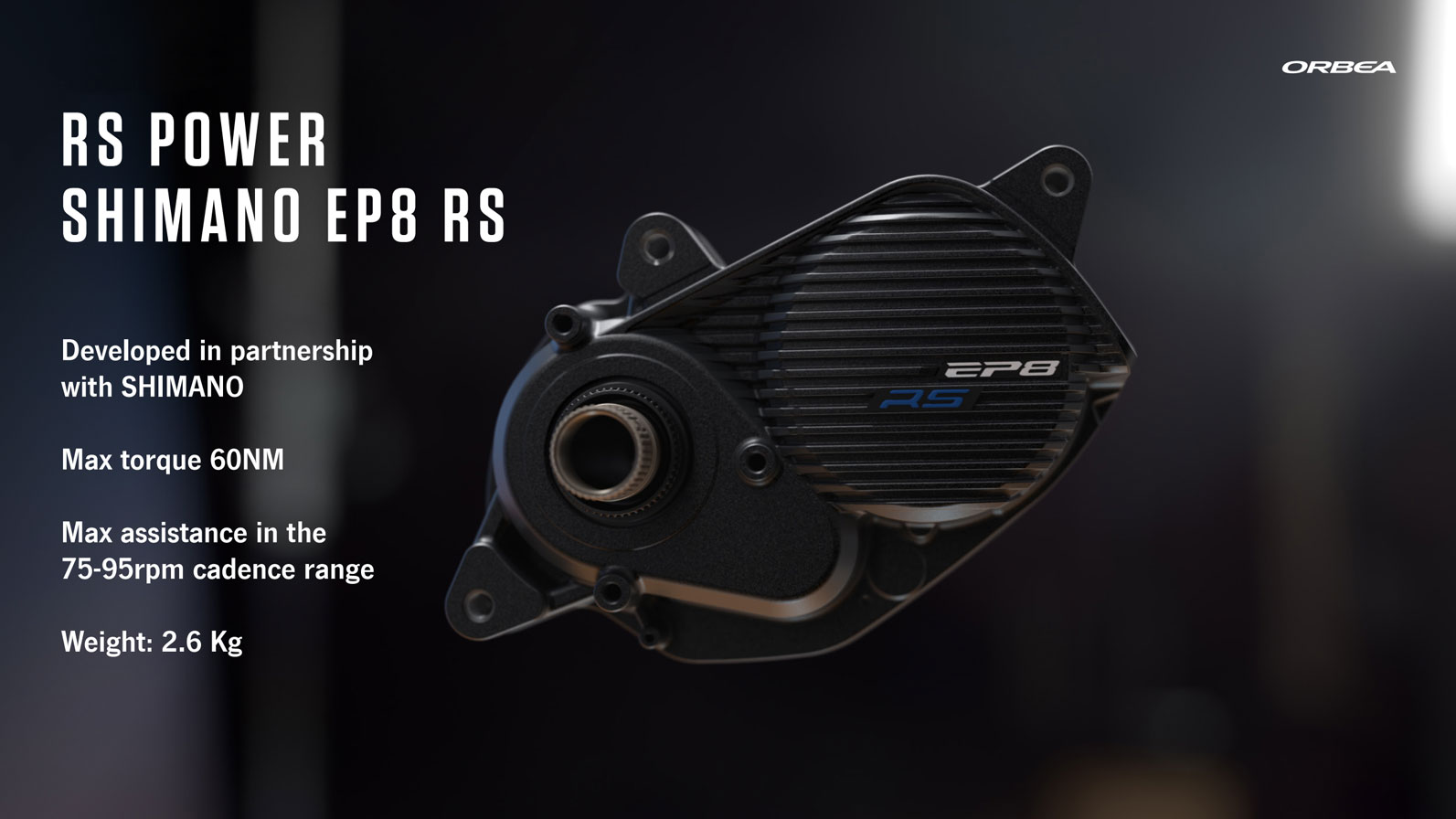 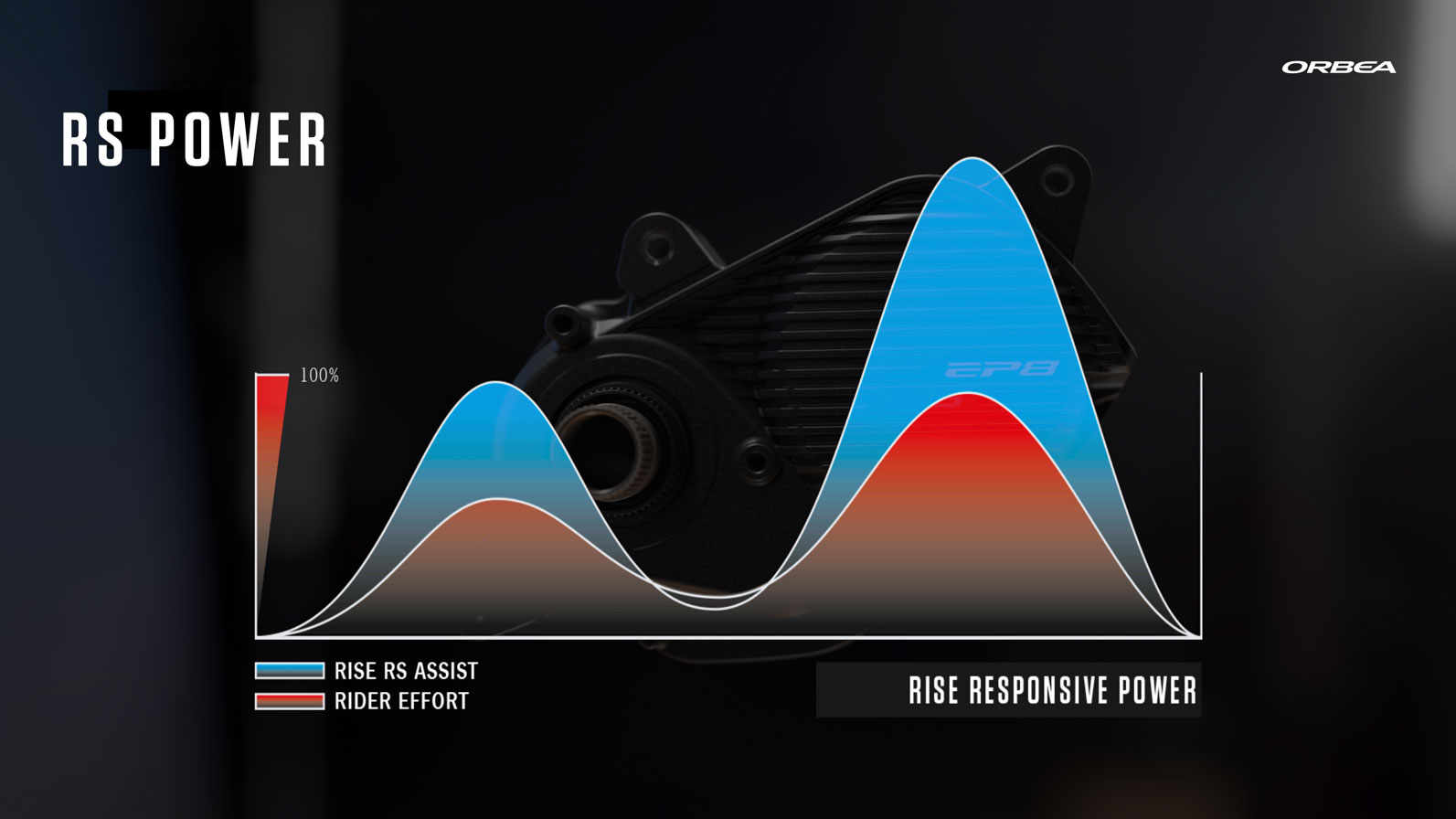 The lightest in the category, also in aluminum

Natural pedaling and handling are the two aspects that differentiate Rise the most. To keep these characteristics intact in the aluminum versions, Orbea’s engineering team scrutinized all the details and invested many hours in development.

The recently debuted aluminum version features a completely redesigned 540Wh battery, developed by Orbea, who rethought the distribution of the 21,700 cells, the housing arrangement, the wiring and the brackets to find a battery that is as optimized and lightweight as possible and with one of the highest energy densities on the market.

For the frame, Orbea selected the best materials and applied the most advanced manufacturing processes, just as it does for its highest-level carbon frames. Thanks to the double- and triple-butted, hydroformed tubes, the team optimized the thickness and shapes of the tubes and reinforced the most delicate areas. In other words, it saves weight where you don’t need material and adjusts the stiffness in the important areas.

In effort to give the highest level of attention to the new aluminum version, Orbea applied its polishing process to the frame. This technique smooths the welds at the tube joints, matching the aesthetics of a carbon frame. In fact, it’s difficult to discern the differences between an aluminum frame and carbon frame. This process also increases aluminum’s fatigue resistance in critical areas.

All this design and development work has resulted in an aluminum frame weight of merely 3.4kg (7.5lbs) — just 100g more than an Occam aluminum frame and 2kg lighter than most aluminum ebikes on the market. The total weight of the new aluminum Rise is an impressive 19kg (41.9lbs) for the top-of-the-range model and 20kg (44.1lbs) for the entry-level model. 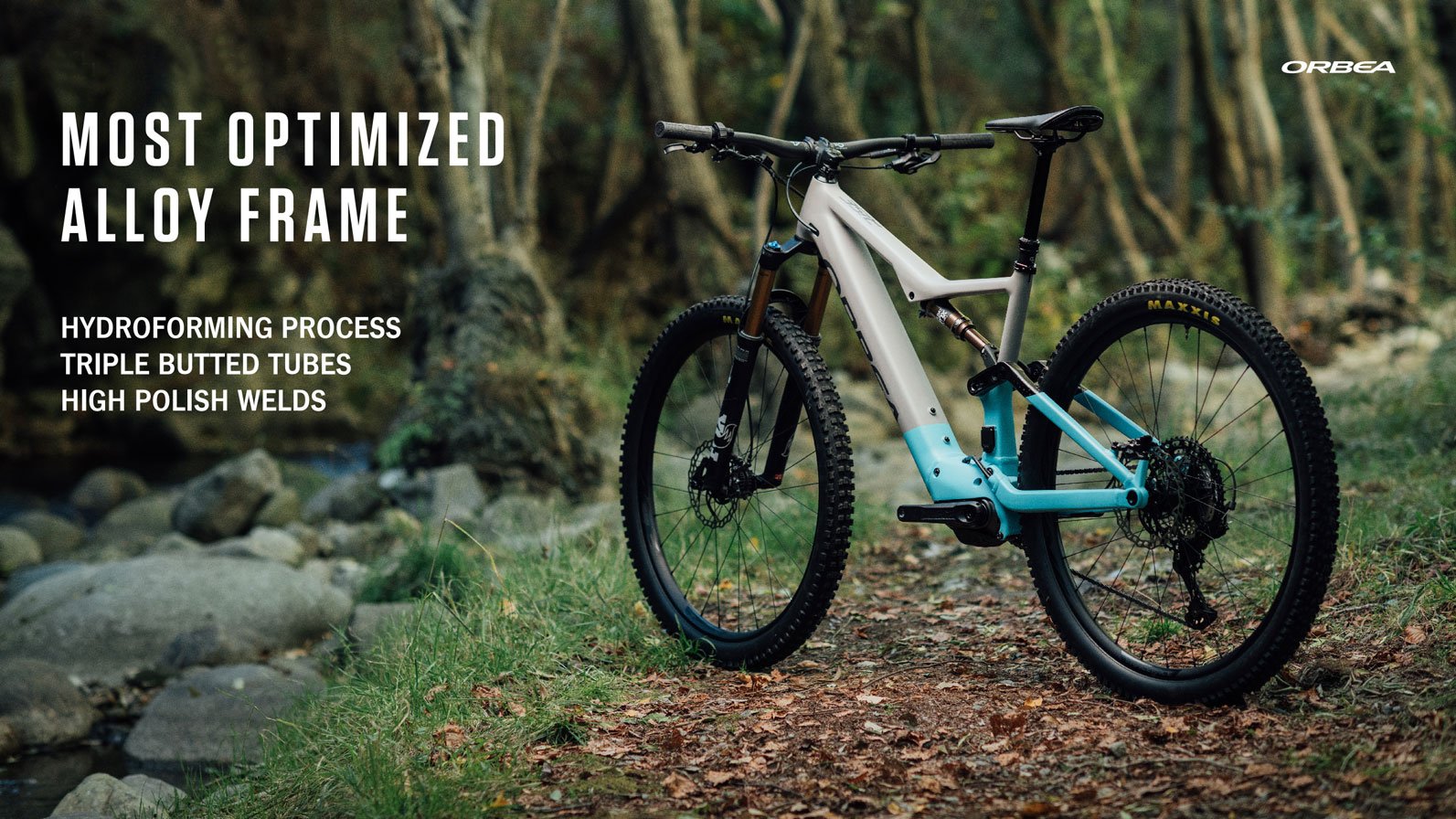 The Rise carbon version maintains its 360Wh battery, enough for rides of 3–4 hours, depending on how the battery is managed. This battery will continue to the be preferred favorite for riders looking for the lightest Rise experience. For longer rides and bigger outputs, Orbea offers a Range Extender that increases the total system capacity to 612Wh.

Orbea considered the needs of riders looking for the experience and autonomy of a carbon Rise but at a more accessible price, so they equipped the aluminum versions with a new 540Wh battery, making Rise Aluminum more appealing for a wide spectrum of riders, reducing the price and increasing the simplicity of the system for those looking for a light ebike without the need for a Range Extender. The new 540Wh battery has a record weight of just 2.7kg. 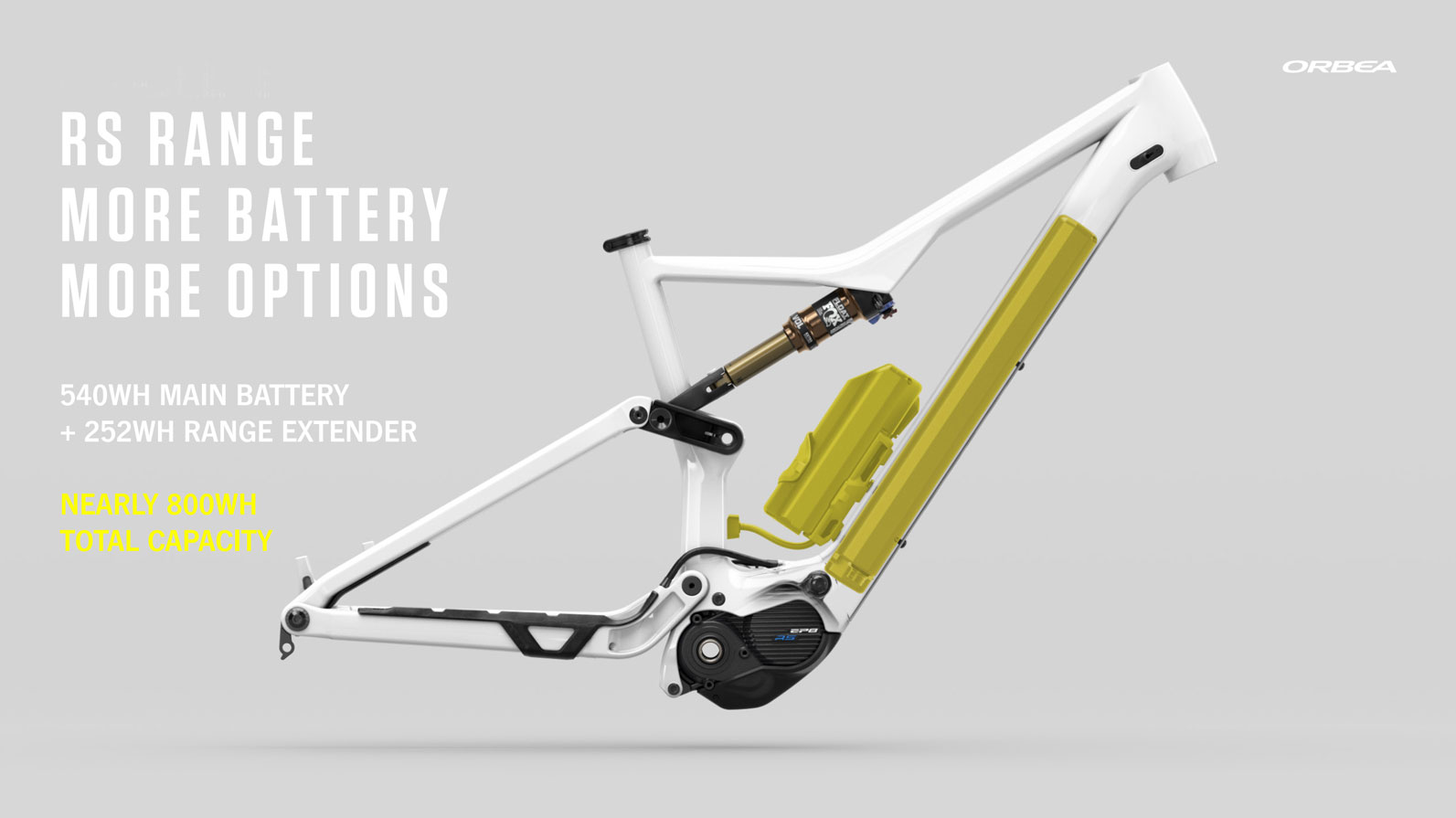 In Eco mode, the stated range for the battery on aluminum models has a range of more than 3,500m of elevation change; 2,200m in Trail mode; and 1,600m in Boost mode. As if that wasn’t enough, Rise Aluminum can be paired with a new 252Wh Range Extender, which results in a “light ebike” of almost 800Wh.

Extra battery capacity usually means a longer charging time, so Orbea developed a new smart charger for aluminum Rises. This charger detects if you’re charging the new 540Wh battery or the new Range Extender and will adjust the charge voltage accordingly. For the main battery, the charge will be at 4A, reaching an 80% charge in just 3 hours; the Range Extender will be charged at 2A. 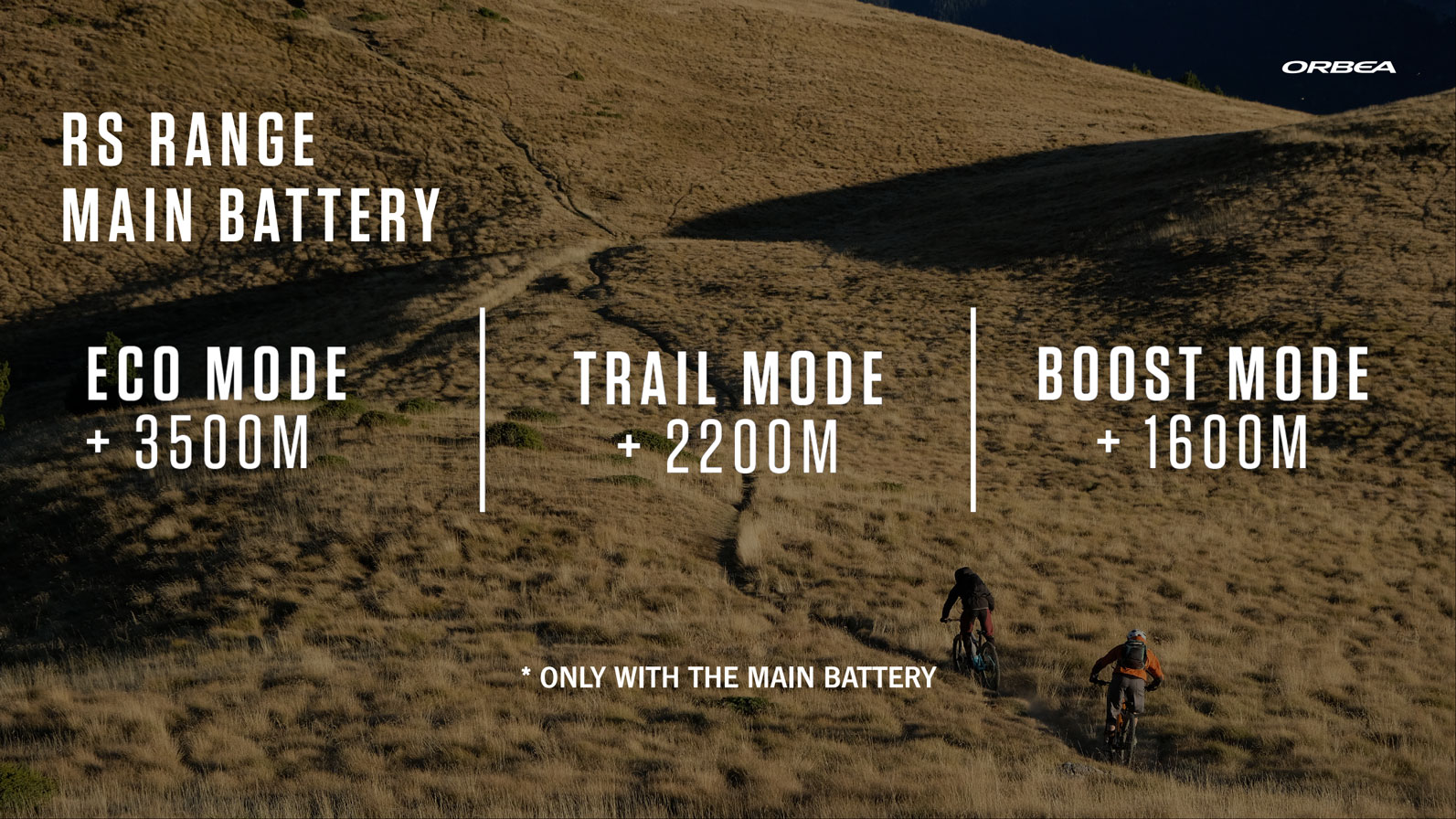 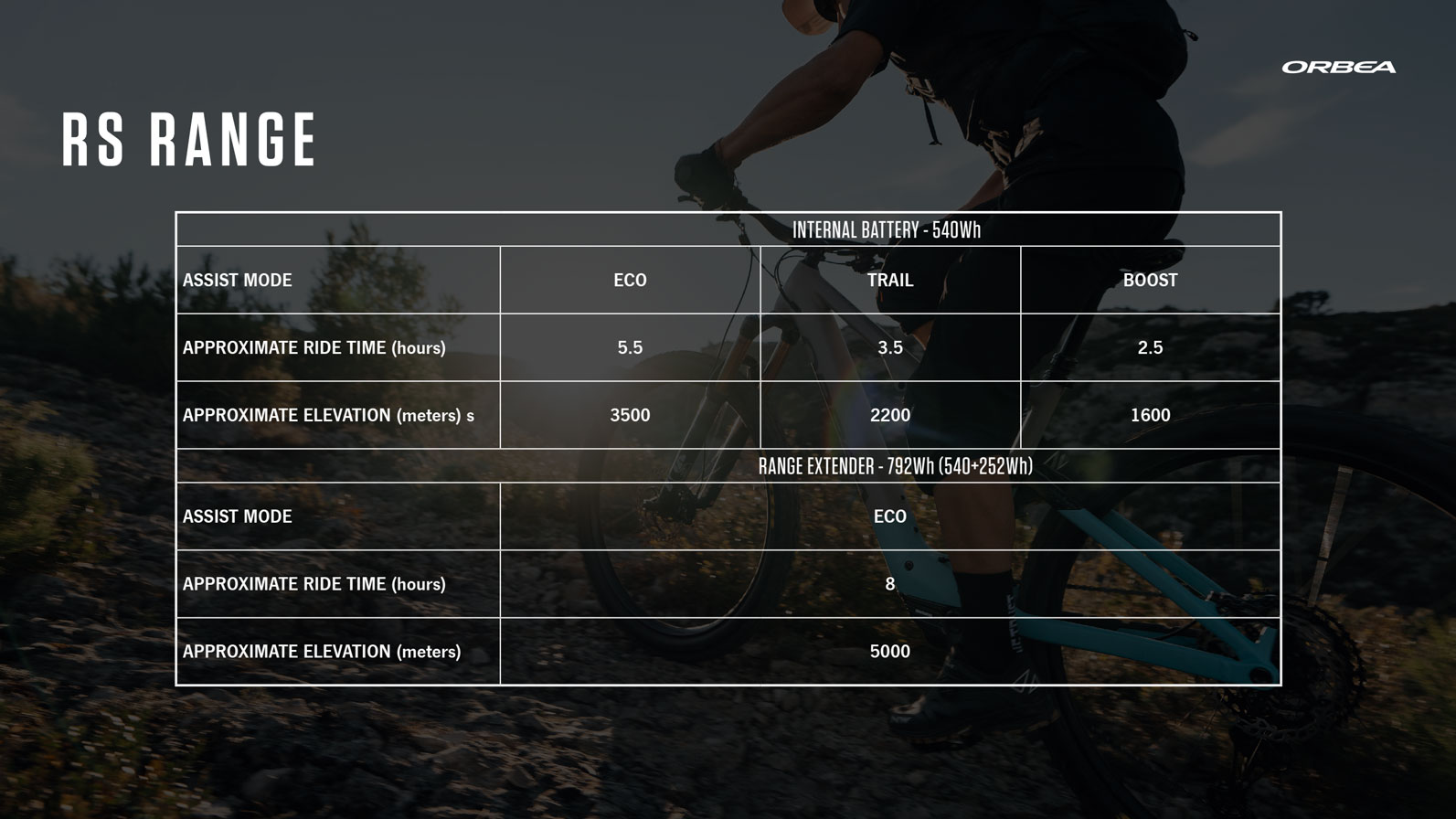 A Fox 34 or Fox 36 fork is available on all models; a Shimano display with more information or the elegant and discreet Junction EW-EN100; and different options for wheels, brakes or tires to fit the needs and preferences of each rider.

The new aluminum Rise models will be available starting in December, 2021. 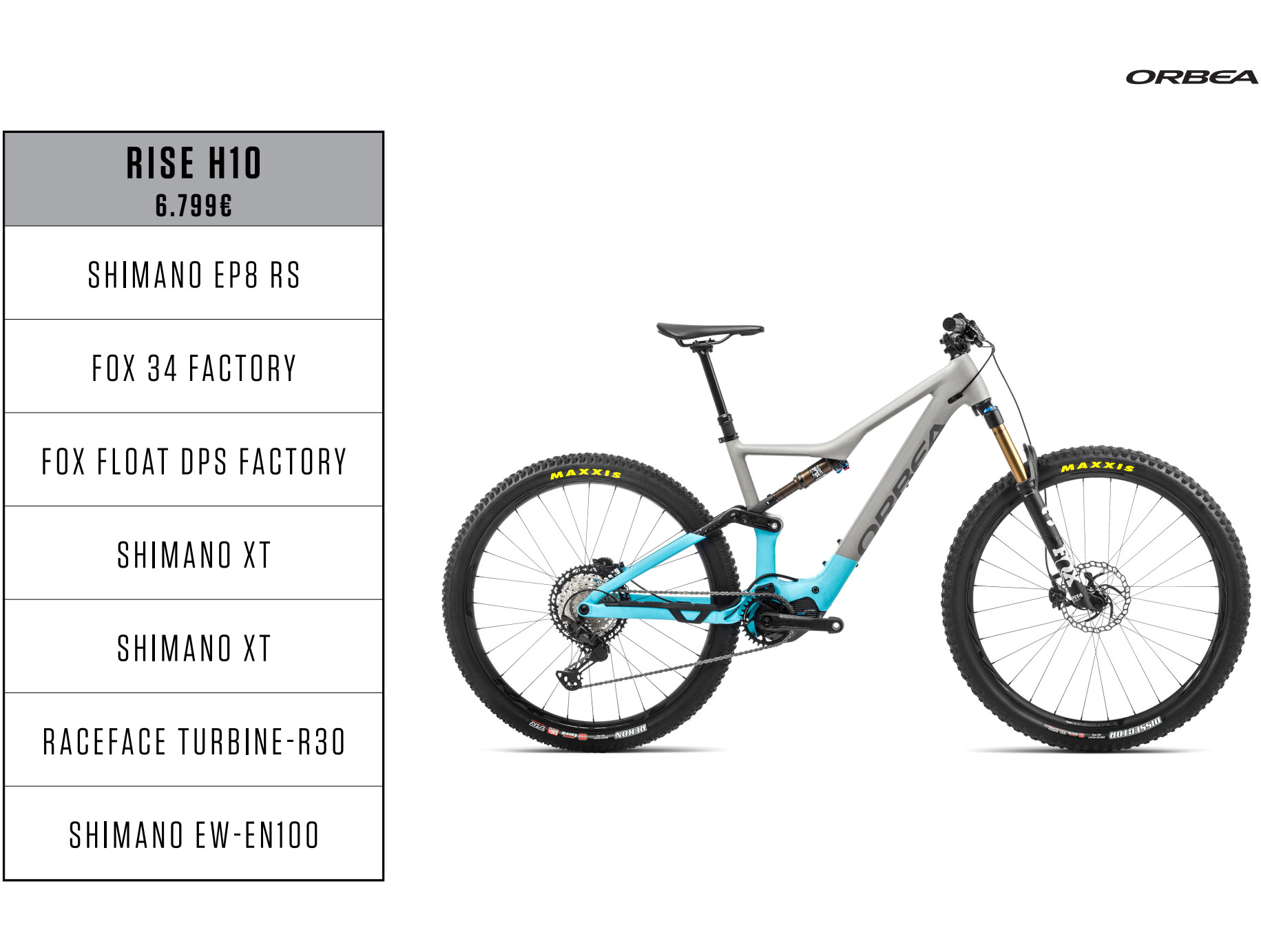 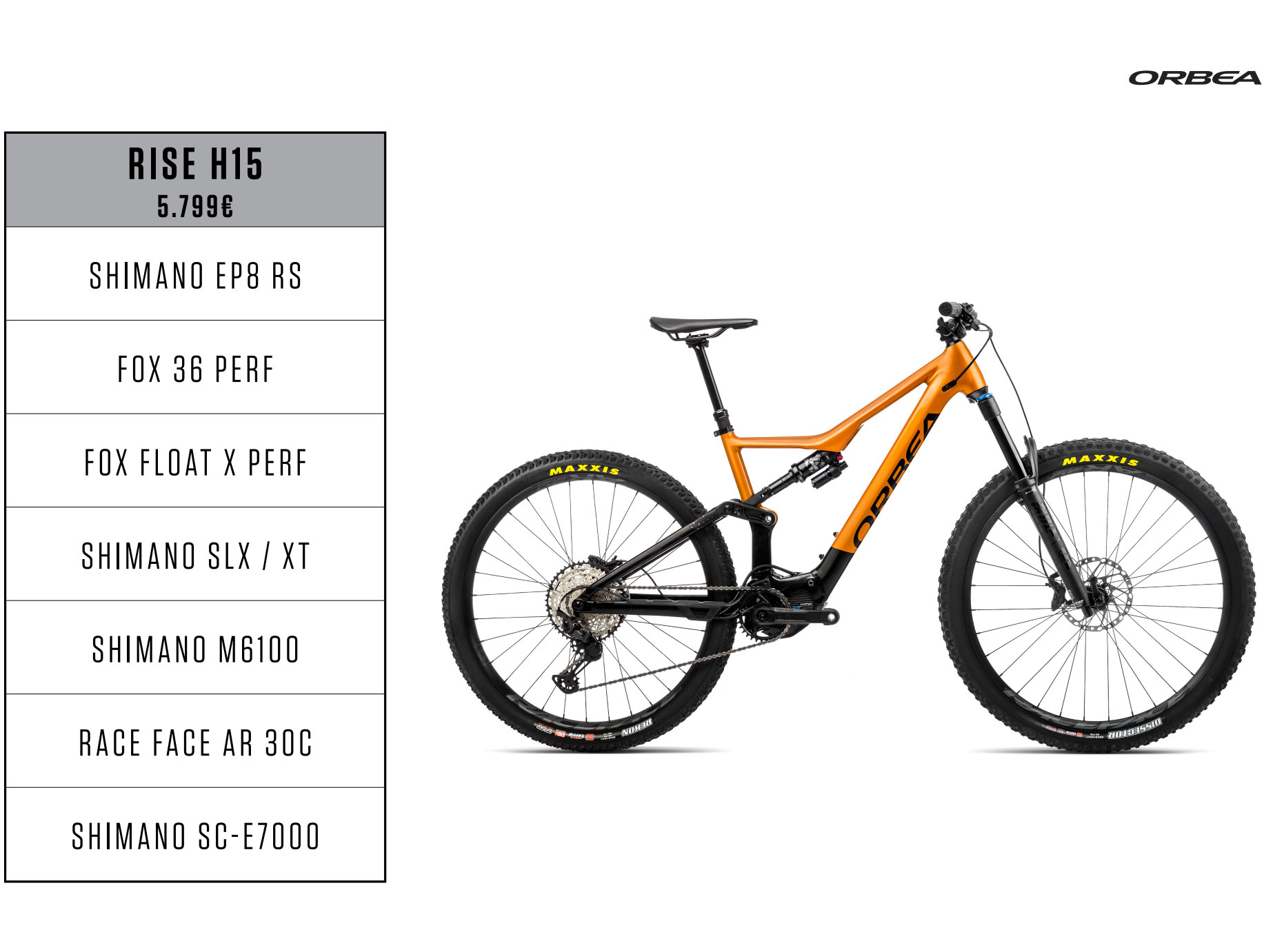 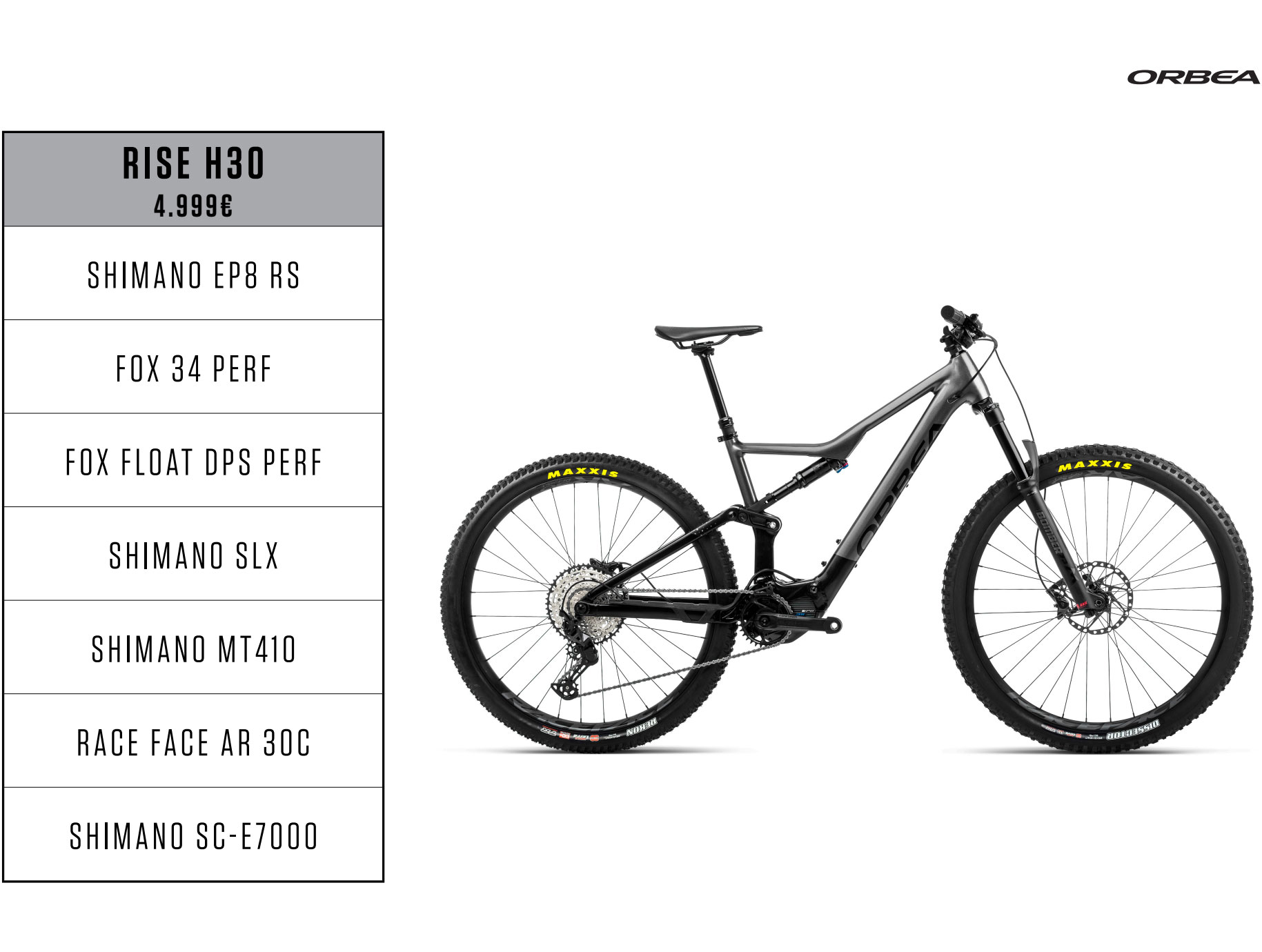